A day that showed how quickly the air changes. As you can see from the early morning photo, the sky started off clear and blue and I had time to get SH9 out and give her a good clean. Needless to say the sunny conditions gave me that lovely morning anticipatory feeling of a great day to come. 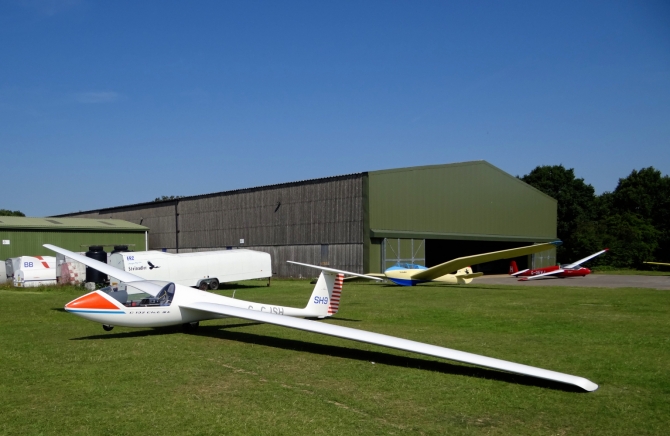 A pristine SH9 (Grob 102) ready at 10am to be towed out to the launch point.
Notice the clear blue morning sky.

By the time we had the gliders at the launch point I could see the clouds building very quickly to the north. I decided it was time to get going – NOW! – since it was forecast to become overcast later in the day and conditions seemed to be changing faster than expected.

My first, and best, flight of the day was from the winch. I got launched at 11:45 just as the main grid of gliders was launching so I knew it was going to get busy. It duly did and I consistently found that the Baby Grob could turn tighter and fly slower than most of the other gliders I was thermalling with. Great for climbing but not so great for glider avoidance! There were a number of times when I left a thermal only to return a few minutes later when the other gliders had climbed higher and were out of my way. I am also starting to realise that I will tend to leave a thermal earlier just so I can get some clear sky! Never realised I was so antisocial.

12:34 : Photographs rarely do justice to the beautiful skies that you see when gliding.
Couple that with their proximity and you can be forgiven for taking too many cloud pictures.

All the flying shots from today are from that first flight which lasted 1 hour 47 mins. A cheap launch for a lovely flight. As the caption to the last picture says, you must forgive me for showing cloudscapes. The 2 shots above were culled from 11 originals! It is an uncommon occurrence for most of us to be in the sky and it still fills me with wonder on every flight – without fail. Despite my flight training, my scientific knowledge of the physics, and my engineering background, I am still drawn to seeing the sky as a wondrous, living thing. Words will fail me when I experience it and I will just find myself laughing in flight at the sheer joy I feel.

13:03 : A rare well focussed shot of Alton.
Also you can see the dead flies accumulating on the leading edge of the wing.

Another thing I have found surprising is the number of dead flies the glider catches on its wing. The frontal wing section is not large and as yet I have not being flying fast so it can only mean that when you get into a thermal you are flying through a veritable cloud of insects. Hmmmm. Memo to self: Do not open mouth when flying an open cockpit glider! It is worth clicking on the above shot and zooming it to full size so see the number accumulating on the wing.

By the time I was getting to Alton the conditions were noticeably deteriorating with the cloud becoming completely overcast but I did manage to find some fires and played with the meagre lift they generated. I found the lift area fairly small since none of them had triggered off a larger thermal.

Another factor that meant I would need to end the flight soon was the increasing volume of the call of nature which was fast becoming the “SHOUT of nature”. It is definitely time to start thinking about “in-flight plumbing” as the BGA shop calls it. This is a purchase I have been putting off and will need to get sorted out when it comes time to do my cross-country flying.

After that wonderful first flight I decided to take an aerotow to see what the conditions were like. Obviously proving I had more money than sense, though the flying bill is looking decidedly nasty this year. I managed to find 1 knot lift over Basingstoke that eventually just petered out so the flight lasted only 32 mins.

Well at least I learnt more about cleaning flies from a glider wing.

Until the next time…

Join 160 other followers
Follow Reflections, Ramblings and Rumblings on WordPress.com