A short posting here about an unexpected end to a normal working Thursday. My Sony HX100 camera was new and gleaming and just waiting to be taken out for a spin! So I popped down to the flying club to see what shots I could get and – in all seriousness, honest – do some test shots with different settings.

The unexpected occurred because as soon as I got to the launch point, one of the K21 gliders was free and I was asked if I wanted to fly it. I initially demurred, saying that I had not “got my head into it” since I had not prepared myself mentally for flying. I have now realised that I usually plan my flying at least 24 hours ahead and so mentally rehearse the prospective activity. However this time it took me about 20 minutes to get my brain up to speed and realise that – Yes! – I would love to go flying, even for a couple of short circuits.

The next unexpected thing that occurred is that a fellow club member offered to take some shots and he created some beautiful ones that I have now had printed and framed. I don’t know his name but he obviously knew what he was doing – so many thanks to you, mystery photographer – whoever you are.

Shots from the evening follow with some of me for a change – so get yourselves ready since I am not very photogenic.

This first shot was me playing around with the camera at high zoom (30x) and pleased with the result. If you zoom in you should be able to see the detail of how the cable attaches to the glider. A shot that was helped a lot by the camera’s image stabilisation. 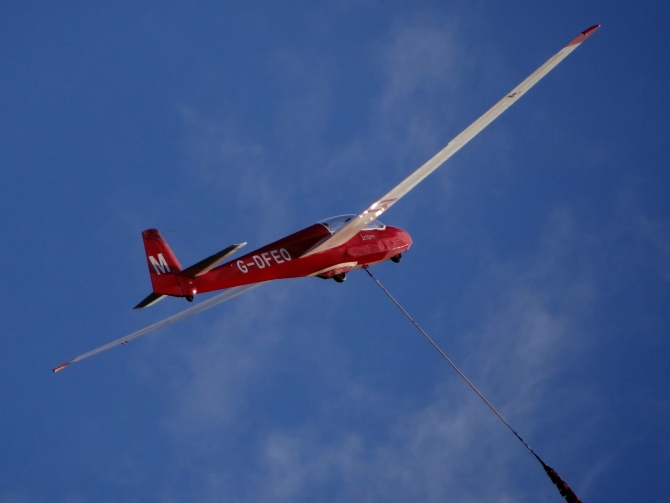 Distance shot of K13 on launch. You can see detail of how cable attaches. Bottom right is the folded parachute.

In this next shot you can see the “retrieve truck” with the two cables attached behind. If you zoom in and look carefully you can see where the cables are crossing the small runway behind the truck.

Retrieve truck pulling back the 2 cables from the winch.

Explanation : Retrieve Truck.
The Winch has 2 large cable drums each with at least one mile of steel cable so they are heavy and have to spin down slowly. After both cables have been used to launch the gliders the Retrieve Truck goes back to the Winch and the driver hooks both cables onto either side at the rear where there are special attachments. It then slowly pulls away and drags the cables back to the launch point – all in second gear – at no more than 25 to 30mph.

During the journey back to the launch point there must be no gear changes or sudden speed changes because the cable drums can overrun and cause a birds nest at the winch. Big direction changes are also out otherwise the cables can cross each other. Other folk need to give the truck a wide berth to make sure that nothing gets in its way, since it is the winch that controls the braking, again to stop the drums overrunning.

The truck driver has to slowly reduce speed as they get to the launch point which signals to the winch driver that they are about to stop – then s/he can just drop the clutch, letting the winch pull the truck to a stop. S/he should then keep the brakes off until the cable has pulled the truck back even further, thus releasing the tension. That way the person detaching the cables from the truck doesn’t risk getting hurt by any “ping back” of the cable as it is released from the truck.

The next set of 4 photographs were taken by the “mystery photographer” and you can see the difference. I particularly like the second one. It is notable that I have not done any colour processing or cropping of it. I have just reduced the resolution for the web.

As is usual at this time of day, the evening air was very smooth and calm, which fostered a quiet and reflective mood. Though no lift was present, it was still memorable because of this graceful peace which gave me a sense of completeness about the flying. A definite breathing out after the hiatus of the workaday.

Ken looking bored on the wing while waiting for me to launch. Notice the lensing of the trees in the rear canopy.
Time for me to have a new haircut!

Lovely shot taken by a fellow unknown club member. I am gently bringing the glider into the full climb.

Second shot of me further up the winch launch into the full climb.

Later in the evening we had this following example of an old motor glider from the 60s. Basically a single seat Slingsby T31 with a VW 1600cc engine on the front. Cheap flying.

And then later in the evening there was a beautiful sunset. A lovely ending to a workday evening filled with pleasant surprises.