Please note that I am not an academic philosopher (as evidenced by my use of the word ‘Dudes’ in the style of Bill & Ted’s Excellent Adventure!) In preparing this material I have drawn heavily on Henri Bortoft’s excellent précis of philosophical history in his book “Taking Appearance Seriously” which he also relates to current phenomenological thinking.

That is the brief overview. Now I will contrast Descartes and Goethe to highlight how these points fit into the discipline of software development.

Descartes lived between 1596 and 1650. He wanted to be sure of what we could really know uncluttered by the input from our senses. The foundation that he found was the ‘rock’ that is our thinking – something we can be sure of. Then given that we knew we were thinking we could be sure that we were thinking with something, an element of our body.

This is how he came to identify this Dualism of the mind and the body, but it is important to realise that he also wanted to fit in with the church’s views at that time which held that the human being as composed of body and soul. Descartes wanted the church to accept the primacy of thinking. He succeeded in doing so which provided an acceptable foundation for the mathematics that became the basis for the Scientific Revolution. This Scientific Revolution then led to the Industrial Revolution which has created the world we know today.

An interesting point here is the language he used to describe the mind and body. The minds was ‘res cogitans’ – thinking, a verb. An active principle. The body was ‘ res extensa’ – extension, the body, a noun. A passive principle. This further consolidated the view of Francis Bacon that man’s mind was to be master over nature, the world’s body. However this point of view has significant negative consequences as we now know since it has led to many of the ecological problems we have today.

Goethe was a natural scientist who was around at the time of the Industrial Revolution and he was against the Baconian approach of the separation of man from the natural world and the mastery of man over nature. He warned of the danger of over-hypothesising and recognised the need to focus on the phenomenon and not on abstract ideas. He realised that over-abstracting away from the phenomenon under observation could cause errors in understanding. He counselled against moving too far and too early into the realm of abstract ideas and coined the term Delicate Empiricism.

Delicate Empiricism is where the Observer needs to be aware of their own process of observation and how it affects their final conclusions. He also coined the term Exact Sensorial Imagination. Rather than indicating an ungrounded fantasy this is a disciplined process in understanding any phenomenon and how it exists, hence the used of the word ‘Exact’.

In software development we use this process all the time. Whenever I have to imagine how my software is going to work, or am trying to understand how it may be going wrong, I have to use this disciplined process of imagination to ‘run’ the software’s structures (concepts) in my head. If I am not exact then I will come to incorrect conclusions.

However Goethe only dealt with the natural world, not something that links well into software development. It was Rudolf Steiner (1861-1925), a Goethean scholar, who realised that the same methods could be used for the perception of our own thinking, i.e. treating our thought as a phenomenon in the same way.

At the point where we become aware of our own thinking processes when doing software development – something I consider to be crucial – we are treating our thought as a phenomenon. Thus as we observe our own thinking we are able to improve it and become better developers. Needless to say this does not just apply to software development, but this domain makes it easier to see the link to the phenomenological thinkers.

Phenomenology focuses on the process of the ‘coming into being’ or ‘Appearance of a Thing’, rather than just focusing on ‘Thing’ itself. This is a very difficult concept to understand but I believe this focus on the process of how we see or know anything is key to healing the destructive consequences of the Cartesian subject object split that are so prevalent in our current world.

It has been said that you cannot actually teach this particular way of seeing things but must embark on a process of just trying to do so. It does represent a change of worldview when we come to look at our environment. It means that we need to realise and understand that the ‘Appearance’ and the ‘Thing’ are ONE item. This can also be understood in terms of reconciling the function of the brain hemispheres.

One of the insights about hemispheric brain function that has endured is that the right brain deals with the immediacy of lived experience, i.e. the Appearance of a thing, and the left brain deals with re-presenting what is lived in order to know something, i.e. the Thing itself.

In the words of Iain McGilchrist, the author of ‘The Master and His Emissary‘, the left brain deals with ‘Static, Isolated, Fixed, Decontextualised, Denotative issues‘. It deals with closed systems and perfection. The right brain, however, deals with ‘Individual, Changing, Evolving, Interconnected, Living ideas‘. It handles things that are never fully graspable, never perfectly known.

This we can see when we are looking at something completely new that we do not understand, or have the concepts to fit. We have the right brain perceiving it and the left trying to make sense of what we are perceiving. When we get it (or ‘grok’ it as Robert Henlein would say) we have that Aha! experience which means that we have identified the concept that fits the perception. It is only at this point that we can know something about what we are seeing. 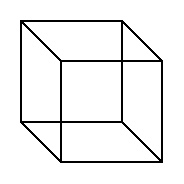 It is difficult to put over this idea of the unity of the thing and the perceptive process but perhaps I can give you a sense of how our concepts affect what we see.

So now just play with switching your perception over from state (a) to state (b) and be aware that nothing is changing in the external world. All you are doing is adjusting your conceptual filter that you are applying to the external percept.

Now can you see another way of seeing it? Try looking it to see a third way before reading further…

It should be possible to see it just as a flat image with lines on it. Not easy once you have seen the cube. If you have a laptop then perhaps rotate the display 45 degrees and that will make it easier.

If you spend some time with this you might be getting more awareness of what is happening inside you as you change your concept filters.

I am going to leave it there for now.
In the next post I will spend more time going deeper into the links between software development and phenomenology.