So – The story so far. I had just completed the Duo Discus check flight with Chris, my instructor and it was still the morning (just), so the next thing to do was to get one of the Discus single seaters rigged and for that I needed to get hold of someone knowledgeable in such things. 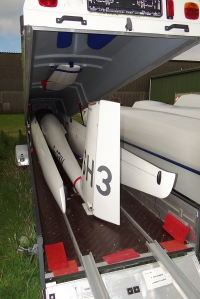 Discus SH3 sitting in its trailer

Let me explain: The three club Discus gliders are kept in trailers rather than in the hangar ready to go. This means that if you want to fly one you have to enlist the help of at least one other soul and put it together – a process called rigging. Luckily the Discus is really easy to rig. Usually on a good soaring day there are a few people who want to fly the single seaters so they all help each other.

However, this was not a good soaring day and could I find someone to brief me in the requisite art? The phrases “hens teeth” and “gold dust” come to mind. Most of the instructors I talked to used to own one but had not rigged one for many years now and were too rusty. In the end I was pointed at the famous Merv, a well known character and fount of knowledge at Lasham who also got his mate, Dave, a current Discus owner, to help out.

Merv is very knowledgeable, an instructor, and possesses a particularly laconic temperament. This coupled with my own psyche resulted in me apologising a lot of the time for disturbing him. My apology rate abruptly increased when I found I had left my diligently purchased BGA wing sealing tape at home and had to borrow some of Dave’s. The guilt rate went up even further when Dave used his car to tow the rigged Discus out to the launch point because yours truly has no towbar on his car! Yeah. I was feeling fairly small by this time, but Dave was great and helped me out in getting ready. Merv was also helping out and doing his instructorly duty briefing me about the flying as well as being ready to observe my performance.

After some final recommendations from Merv to watch out for PIO (Pilot Induced Oscillation) on take-off due to the sensitive elevator I got myself strapped into the cockpit. The radio seemed to have a dodgy connection, but once I jiggled with the panel and its knobs it came good. If it did stop working it was not going to be an issue since this was only going to be a local flight to get the hang of the glider, and given the prevailing conditions it was going to be a short one. I normally carry a spare radio if the conditions are good so that I can either use it as a spare should the main one fail, or sometimes it can be useful to listen to two frequencies at once.

While waiting for the aerotow I was feeling fairly nervous, so just sat in the glider while I waited and calmed myself down and managed to relax. The tug pilot was told I was a Discus virgin (actually the phrase used is: “First time on type”) so knew to treat me gently!

I went through the pre take-off checks and was hooked on. During the take-off run, the elevator sensitivity was noticeable and I did have a couple of PIOs but got it under control fairly quickly. After that it was another lovely flight, albeit under rather overcast skies.

The glider handled very well and I landed back near the trailer where Dave was waiting with his car to take the glider back and help me derig it and pack it back into the trailer. 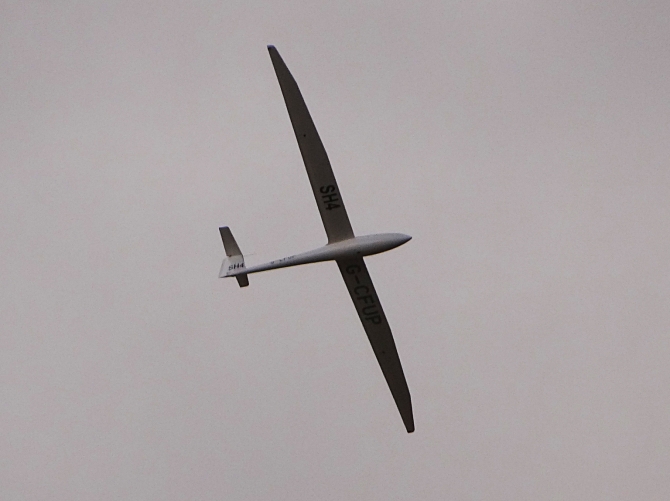 So many thanks again to Merv and Dave for helping me out with becoming current on the Discus.
I am looking forward to many hours of great soaring in these “Modern Beauties”.