At last! I have been “converted” to the single seater “Baby” Grob 102 Astir.

Due to the heavy rain and hail of the day before, combined with the morning sun warming the ground, it started out very misty as you can see from the following photo.

A misty, marsty Lasham morning at 8am.

[Apologies for the quality of the pictures. I was using my phone camera and forgot to switch it to high resolution. I am currently awaiting delivery of a better Sony HX100V camera but that is another story.]

The above shot encapsulates the wonderful feeling of the day still to come and this is why I love to hang around airfields, even in such weather. You can smell the history of its wartime role as a Mosquito bomber base.

After a full English breakfast we extracted the gliders from the main hangar and I had a thorough briefing from my instructor, Ingram, about performing the daily checks or DI (Daily Inspection) for the Astir. He was a mine of information about what to look for and special ADs (Airworthiness Directives) pertaining to the aircraft. All this had added authority because Ingram used to be a proud Astir owner.

With DI completed and the glider walked to the launch point, it was time for an aerotow check flight in a K21. It was not my best flight but was “satisfactory”.

Conditions
A gentle 10kts breeze from the west.

The appropriate response to Ingram’s last sentence can only be: Yes! 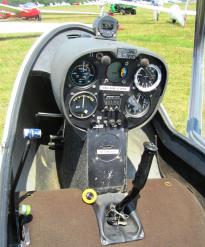 Although the cockpit is looking the worse for wear.

The photo on the right is a reminder of the cockpit layout for the Astir.

The day was turning into fantastic flying weather and by 11am they began to launch the usual Saturday grid of approximately 30 gliders and the main club launch point had to wait its turn launching aircraft when it could. Luckily they spared one of the tug aircraft to come over and take me into what was fast becoming a crowded sky.

The passage of the previous day’s weather had left a cool air mass and the differential between this cold air and the warming effect of the sun caused a lot of rising air.

As you can see from the next photograph, that mist had now risen from its morning bed, becoming a wonderful fluffy cumulus sky as the temperatures rose.

This could be good. As a child I remember my daydreaming reveries about such weather when I used to read about gliding. And here I am, coming on 55, about to realise those boyhood dreams.

Could it get any better?

Waiting for the Aerotow. The day looks beautiful. More 'Fluffies'

After all the briefing about the aerotow differences it was a smooth launch and I didn’t do any PIO (Pilot Induced Oscillation) on take-off.

Once released from the aerotow it became clear that there was a significant difference in the way the glider reacted to the wind-currents compared to the 2 seater, although the handling was similar to the K21.

The best description I can find is that it is as close as you can get to having your own feathers. (Does that make this a tweet?!) Because it was lighter, it seemed that I could feel more gusts and get a better sense for what the air was doing.

I loved it and there were more shouts of joy from the cockpit!

Looking to the north over Basingstoke.

Once airborne at that time of day it was not hard to stay aloft and my first flight lasted two and a half hours. In fact I only needed to land because of the call of nature! Looks like I will have to get a pee bottle if I continue to indulge in such long flights.

The Astir after the first flight. The main launch point, with both aerotow and winch, can be seen in the background.

The next launch was from the winch and I had a bit of a surprise as I came off the wire when I found myself close to a thermalling glider, although he was a bit higher. I immediately turned to fly through the thermal he was using as he cleared the area and found that the lift was quite strong.

Personally I don’t like hanging around the top of the launch area because you can expect another glider to be up to join you quite soon. So I zoomed away to the North side of the airfield and went to my favourite brown field – a known good thermal source – where I found a thermal and managed to climb away.

Once up to 3000 feet it became easier again and I managed to do more triangular circuits from Alton to Basingstoke and little towards Popham. Currently I must not go too far since I am not cleared for cross-country gliding and so the rule is to stay within gliding range of the airfield.

The following two shots are of Lasham and Popham. At Popham I was as high as I could go (minus an extra 300 feet safety margin) without getting into controlled airspace.

Picture of Lasham airfield taken from the south at about 3000 feet agl. 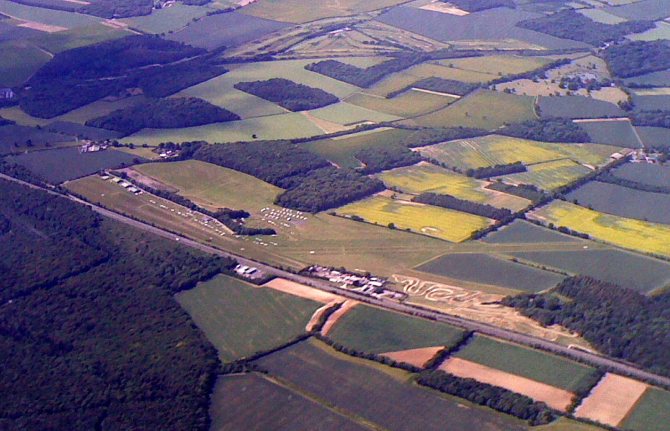 A lot of the time I spent trying to understand how the clouds were working. There are times when they give lift and times when they don’t and as yet I am not so good at working out the difference.

By 4pm it was time to land and get ready to run the launch point in the evening for the Lasham youth flyers. But thanks to Val looking after the launch point at the very end, I did manage to have a couple of winch launched evening flights in the Astir before cleaning it and putting it to bed in the hangar. 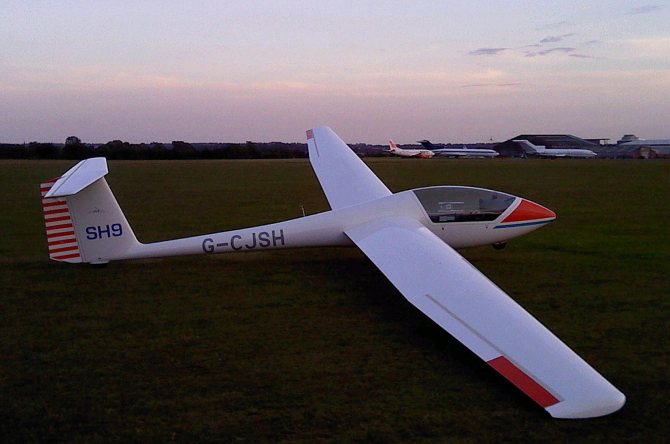 A shot of the Astir (at 9pm) after its last flight of this wonderful 13 hour day.

The evening was completely calm and the glider slipped through the air with a sigh, as though it knew how I felt. I could trim the glider to a speed and it stayed there! Luxury, after the more turbulent conditions of the day.

Explanation : Trimming a Glider (or Aeroplane)
It makes the pilot’s flying life much easier if s/he manages to trim the glider correctly. The idea is to get the speed of the glider to the value you desire by adjusting the pitch (nose up/down) attitude. Once this is done there is a trim adjustment that helps keep the pitch steady so you can actually fly hands off. Some instructors tell you to take BOTH hands off the stick and wave them in the air so s/he can see you have trimmed the aircraft properly.

It is important because speed control is crucial to good flying and is one of the hardest things to get right.

And so home to bed…

Coming soon:
Time to get back into flying the motorglider and get my NPPL licence revalidated for the next 2 years.