So – I was at the solo stage – I had received more training – I had all the items from the Lasham White Card syllabus signed off. What next? Well, it was time to have the White Card Test with the CFI (Chief Flying Instructor).

First a little explanation about the Lasham Card system. There are 4 card colours: White, Red, Yellow and Blue. The launchpoint bus raises a small windsock that indicates the conditions. Though there are only 3 windsock colours: White, Red and Yellow. A White Card will allow you to fly in “White Sock” conditions, i.e. when the white windsock is flying from the front of the launchpoint bus.

Below is an abbreviated description of the card meanings:

– White is the first level after having reached solo stage. This allows you to fly without a check flight in White Sock conditions. Though you must still get a briefing from an instructor.
– Red is equivalent to the British Gliding Association “Bronze Badge” plus a “Cross-Country Endorsement”, meaning you can fly cross country by yourself though only after being briefed by an instructor or CFI (Chief Flying Instructor). I shall describe this further on a subsequent post since there are other limitations.
– Yellow is for stronger and nastier wind conditions, and you still need those cross-country briefings from an instructor.
– Blue is the highest card rating and means you do not need to be briefed by an instructor before going cross-country.

I put my name down on the flying list ready for the test, and then did some retrieving of the cables from the far end by the winch until the CFI was free. The test consisted of 2 flights with “The Man”, the second of which was, of course, a simulated cable break where I was taught a technique for dumping energy quickly as you will see from my personal notes. After a few questions about speeds and so on, he pronounced the verdict, saying that I had passed!

He then signed off the relevant section of the White Card and folded it up putting it into his pocket. Notice that getting a card rating at Lasham involves taking the card away! It is then kept in your records to prove that when you say you are “White Card” rated, you are not fibbing.

Personal notes:
– Dumping energy by opening full airbrake and putting nose down to 70kts. Works well with the K13 when you need to land ahead short.
– Be aware of the pitch-up tendency in strong winds due to the wind gradient. It means you will have to fly back down through the gradient if you get a cable break so keep it under control.
– Don’t forget about 55kts manoeuvring speed. 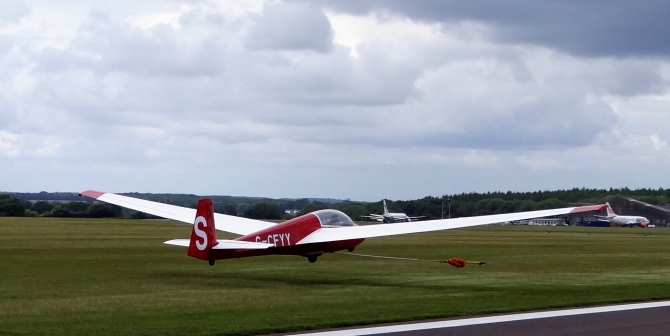 Diagram (not to scale) showing how the windspeed falls off closer to the ground.

Explanation of Wind-Gradient
Wind gradient is an important idea to understand since it has a big effect on a landing glider. Due to friction the windspeed at ground level will be less than the windspeed at height. (For meteorological purposes “surface” windspeeds are measured at 10 metres above the ground).

Before taking off you should decide upon your approach speed. If you do not approach fast enough then as the windspeed reduces closer to the ground, you will suddenly lose flying speed.

Taking the example in the diagram. If the glider starts its approach at 55 knots airspeed (too slow in the shown conditions) it will lose 15 knots of airspeed as it descends through the wind-gradient, even though the pilot has not changed the attitude of the glider. If it encounters a gust it can be even worse. The sudden reduction of airspeed can lead to a stall on approach, where it suddenly stops flying. Not what you want to happen!

So you must make sure that you set a high enough airspeed before you start your approach, because as you come down through the wind-gradient you will probably need to steadily lower the nose to maintain your airspeed at a safe level. This is a very disconcerting action for a human being since our instinct is to avoid the ground not point more towards it! For the K13 we are taught to use 50 knots plus half the estimated windspeed. Thus the approach speed for the conditions shown in the diagram should be 65 knots.

As you can imagine speed control is a hard thing to master but is really important at all phases of flight, and not just for glider pilots. Power pilots also need to master speed control.

Once the test was over I decided to take the Falke motorglider up for a short flight since the gliding conditions were not great. Of course it was purely an incidental consideration that I wanted to try out my new camera! 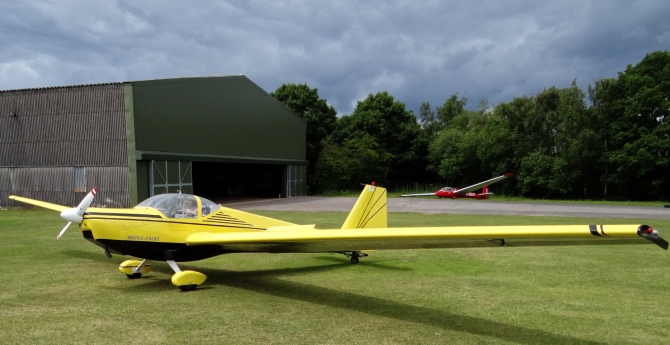 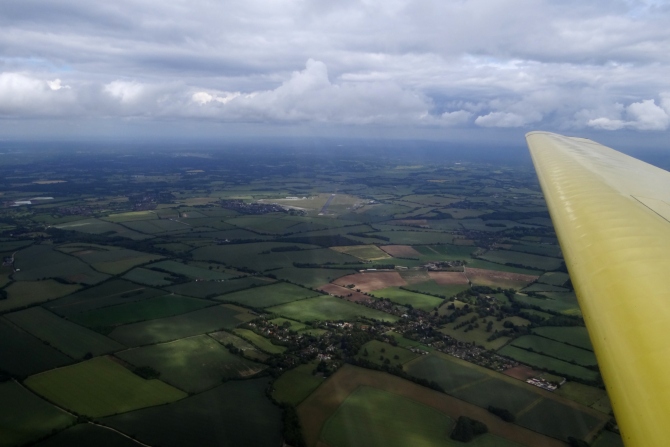 Coming soon: Getting the Bronze Badge.