I have recently witnessed a true spectacle and Grand Day Out – with apologies to Nick Park.

I was lucky to see the British Formula 1 Grand Prix at Silverstone, followed by a reflective evening thinking more about the relationship between the human and machine sides of the whole car racing spectacle.

The company I work for has been sponsoring the Formula 1 Virgin Racing Team this year and I luckily got one of the tickets for the British GP on Sunday, care of Virgin hospitality. It was also a day to see what my new camera could do! 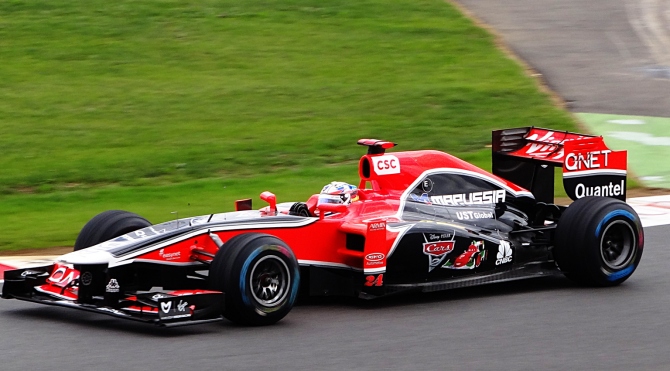 Timo Glock of the Virgin Racing Team. Tricky to get the shot with my digital camera due to button delay. Only just got the front of the car.

I must first confess that I am not a die-hard F1 fan. Like many others I have watched it on TV, but have never gone to see it in the flesh. The last time I saw any motor racing was when I went to see some karting race day at Blackbushe, having raced karts there myself in the late 1980s.

At Silverstone I was mainly struck initially by the friendly crowd atmosphere at the track. It seems that the british fans have a special family feeling to the sport. And during the race when the british drivers go by the atmosphere is particularly electric. Though normally a fairly pensive sort I, like others, definitely got carried away by Lewis Hamilton’s progress throughout the race, and at certain points found myself jumping to my feet and shouting myself hoarse as the whole crowd rose to cheer him along. Crowdthink perhaps, but harmless enough in this case and quite a fantastic feeling. 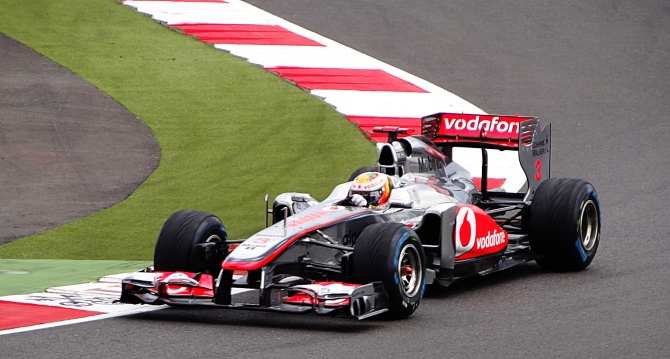 Lewis Hamilton blasting past after the rain had stopped.

I was in the “Club A” stand which gave us a direct view of the final tussle between Hamiton and Massa for 4th place at Club Corner. Everyone in the surrounding 3 or 4 stands were on their feet as Hamilton managed to fight his way back to keep 4th place. Hence the following seemingly silly photo of a bit of his car left on the track after the contact between them. 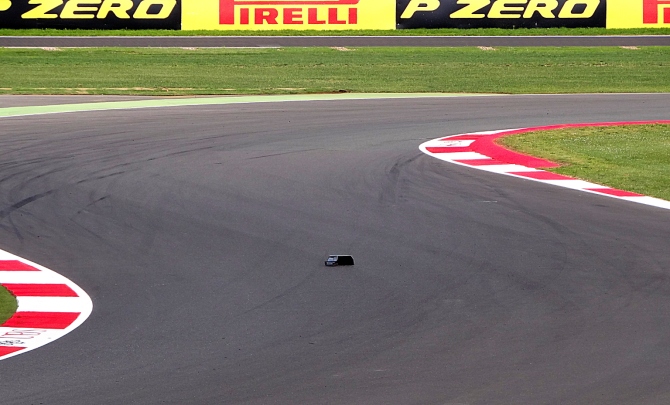 OK OK. A gratuitously silly picture of part of Hamilton's car on the track after the bump with Massa.

Before the race a great display, as ever, by the Red Arrows brought a further element of British Pride to the proceedings. I even managed to get a half decent shot of them. 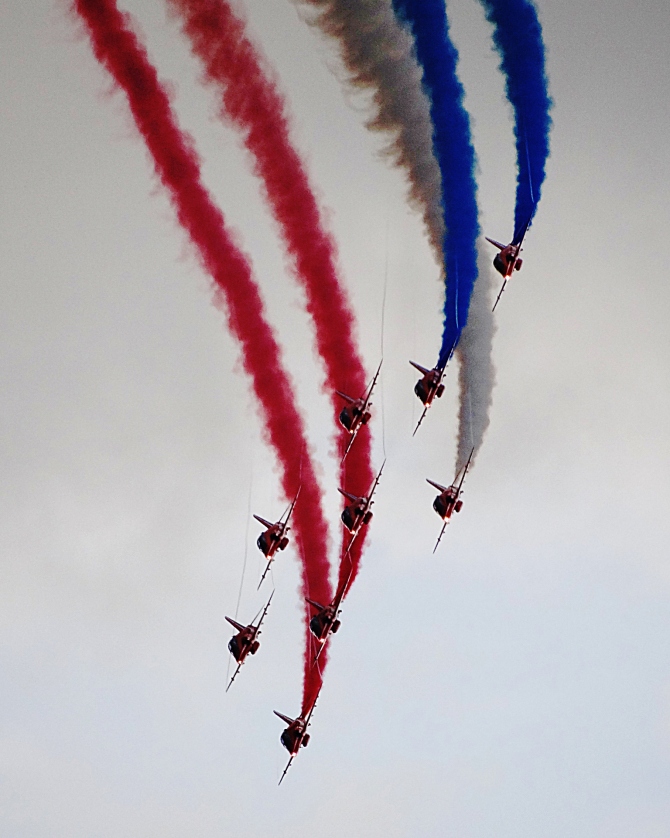 A lucky shot of the fantastic Red Arrows with landing lights on but no undercarriage down!

So what were my reflective thoughts? In the evening the Virgin hospitality was very good and extended to having a viewing of the film “Senna”, which prompted my gray matter to mull over a number of points.

Firstly, it seemed to me that the brazilian driver drove from a place that was strongly human, and it made me think about Lewis Hamilton. Though such comparisons are odious, I do think there is a similarity in their styles which explains why they could draw such a response from the crowd. My best word for it is that Senna drove, and Hamilton drives – from the HEART. Despite all the surrounding amazing technology, their humanity is visible in their driving style. I believe this can be said about other drivers too – but I am relating to these two drivers in particular.

Both had their origins in kart racing. Hamilton, like Senna, has an aggressive style of driving which I believe shows his passion to win. This style can give problems sometimes – for instance I can see Hamilton struggling with the current Formula 1 tyre regime. I thought this was noticeable this weekend when Vettel was attempting to get past Hamilton. Vettel didn’t get past and came in early to get a tyre change. Was this possibly because he was having to drive more aggressively at such close quarters to match Hamilton? Only he knows.

However, back to my main focus. I found that this situation of driver passion and mastery related to some of my thoughts about the interaction between the human being and the technology.

As I have noted before: The technology amplifies our capabilities. Thus it requires more skill, judgement and mastery. Any small mistake is amplified into a big mistake, and particularly so in motor racing. The technology can also mask and eclipse the human being behind it.

Yet here we witness these sportsmen mastering the technology, but more importantly, in this mastering of the are mastering themselves. It is this all too human struggle that is so compelling, especially when they succeed, and especially if we can see and feel the struggle with them. In this case Hamilton’s drive from 10th position on the grid to 4th or 5th, and in the rain, was just elating. No other word for it. I must also mention that Button also drove really well until having an abortive pit stop.

I wish all the drivers a safe battle with their opponents, and also, a constructive struggle with themselves.

Too many VIPs. There was an almost constant and noisy stream of helicopters coming in and out through the whole day. 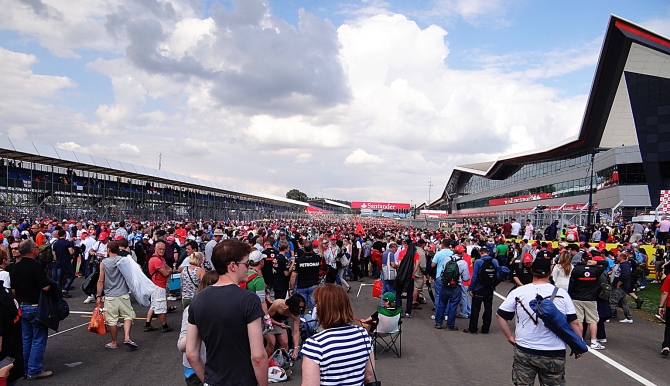 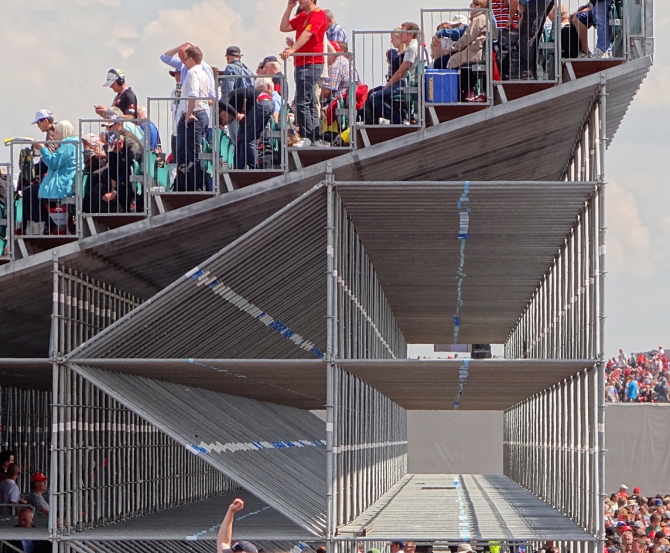 Charles trying to get all arty farty with his photography of the side of the stand.