Well this day was marked by a number of points. First it was a Lasham Regionals Competition day as remarked on in my previous post.

Second, I had Jim, one of the first gliding instructors I had at Lasham. Not so remarkable you say? Well, no, except for the fact that it was 30 years ago! I showed him my logbook entry with his signature from 22nd May 1981. Needless to say he was horrified, mainly about the passage of time I believe, hopefully not my flying performance.

Weatherwise it was a lovely day with beautiful fluffy cumulus clouds like in the following pic. By the way that is a technical term of course. i.e. Fluffy, not Cumulus… Silly!
🙂 (Update: See a favourite clip of mine from the film “Despicable Me” – “Its so fluffy!”) 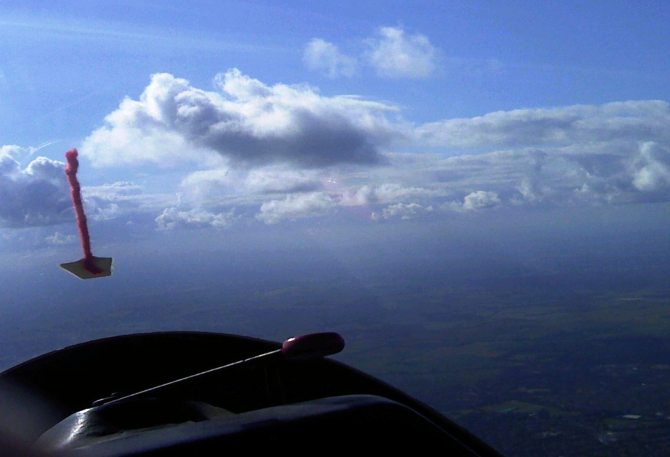 However that shot was from later in the day. The first flight of the day was with Jim in the K21, number 431 and, unbeknownst to me, involved him asking the winch person for a simulated power failure. Since I was trying my best to narrate my way up the launch, describing what I was doing and why, the failure occurred while I was talking. Needless to say I shut up immediately as the load of dealing with the launch failure took over my thinking. Of course, being a man, I can only do one thing at a time.

Once we had landed safely down at the side of the winch, and having used full airbrake, yet releasing it slightly just before landing, Jim was happy for me to go off flying solo.

Explanation of Airbrake/Wheelbrake Interaction on 431
As with a number of other gliders, the airbrakes are connected to the wheelbrakes in such a way that when you pull on full airbrakes, it engages the wheelbrake. Useful for precision landings and the like. However it is important not to land initially with the wheelbrakes on, otherwise surprise and possible damage ensue. You need to allow the wheel to rotate freely as you contact the ground, then apply the wheelbrake as required during the landing run.

The current target was to convert to flying the single seater. I had done all the necessary exercises, but needed another 3 solo flights to get to the 20 required for the conversion. I was being very honest and not counting the 6 I had done way back in 2009, let alone the 29 I had done way way back in 1987/88!

And so… today I needed to do 3 solos in the K21. No problem! I can get those over and done with in a blink of a gnats eye. (Do gnats actually blink? Hmmm. Don’t think so)

Back to the winch launch point – a mile long walk from where we had landed! Get the glider lined up. Secure the harnesses and the canopy of the instructors seat. A nice launch to 1800 feet followed by a bimbling search for some lift. Got down to 1300 feet before managing to connect to rising air. Only 2 knots up initially, but that will do.

Here is the shot of the glider rising at 400 ft per minute, or 4 knots up.

In the end I managed to get all the way up to 4500 ft. Words really cannot do justice to describing just how elated one feels after such a climb. For a beginner like myself it can be such a struggle to do this that it usually ends up with me shouting with elation. The only other experience like it is when skiing and you look back up at the mountainside down which you have journeyed.

In the end the lift was so strong that I had to use my airbrakes in order to stay below the airway above Lasham and it was fast becoming clear that this would not be a short flight. However you might remember it was a competition day and at the 1 hour 40 minutes mark I heard the first competition glider returning. A mini-panic ensued because I did not want to get caught in the flurry of fast competition landings with gliders coming from every direction at once.

So I rushed back to Lasham using lots of airbrake and landed then parked the glider so I could go over and see how the youth gliders had done. The following photo is of the road from Basingstoke leading to Lasham, which is top left of the shot. 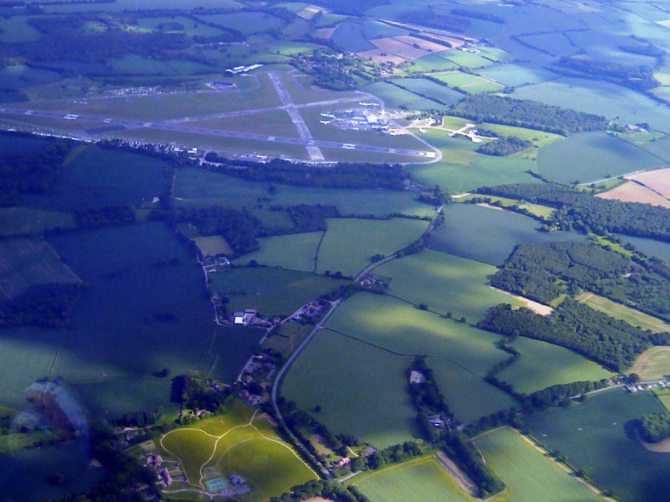 The road from Basingstoke to Lasham, going through Herriard.

The last of the competition gliders had landed and I belatedly remembered I needed to do another 2 solos! So time to rush back to the glider and take an aerotow for yet another fairly long flight of 67 minutes managing to get a distant shot of Basingstoke.

After returning to land I followed this up with a short winch launched flight to take me up to my 20 solos.

All in all a wonderful soaring day with 3 hours of flying and achieving the 20 solo target. Weather permitting, moving on to the single-seater will hopefully be the subject of my next post…